Arthur was born on 29th December 1891 in 139 Albert Bridge Road, Belfast. He was the son of James Hollywood, a house and rent agent and Elizabeth Hollywood nee Carson. The family moved to Bangor in the late 1890s and lived in Ballyholme Road before moving to Ballygrot (Helen’s Bay).

He attended Friend's School, Lisburn, from September 1903 to July 1906 before going to Royal Belfast Academical Institute in Belfast and thence to the Royal University of  Ireland in September 1909.

He is recorded on the Roll  of Honour for the 1st Batt. North Down Regt. as serving in F Company alongside his brother James.

The family attended First Bangor Presbyterian Church and both James and brother Arthur are recorded on the church’s war memorial. 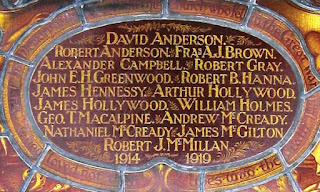 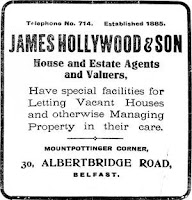 Arthur was working as a rent agent in his father's business on the Albertbridge Road, Belfast, when he joined the 108th Field Ambulance, part of the 36th  (Ulster) Division, on 12th September 1914, as a Staff Sergeant. The London Gazette of 2nd July 1915 records his commission as Temporary Second Lieutenant  in the 12th (Reserve) Battalion, Royal Inniskilling Fusiliers on 19th April 1915, and joined the 9th Battalion Royal Irish Fusiliers in  January 1916, being posted to A Company. He was subsequently appointed  Lieutenant on 29th February 1916.

The web site for Inst and the Great War records that:–
“He was killed on 1st July 1916 . . . during the Ulster  Division attack on the west bank of the River Ancre. Sgt Whitsell  stated: ‘The first wave of men left the British trenches followed by the second wave to which Lt Hollywood belonged. I followed them with the 3rd wave of men. I saw Lt Hollywood jump into the German trench. I was then wounded and saw no more. Before this attack, Lt Hollywood showed me the rips in his steel helmet where he had been hit, but seemed to be all right then.’

“Private Stewart and Private Coppleton both stated that they saw Arthur  being killed at Hamel, just after leaving the 1st line German trench  about 13.00. Private Cobain wrote that he saw Arthur being ‘hit by a  machine gun bullet during the advance’.

“It was reported that Private Nelson, who was wounded in the attack, lay beside his body for a night.

“Sgt Slater reported that he saw the body being brought in, and that it was buried in the Hamel village graveyard, but Arthur now has no known  grave and is commemorated on the Thiepval Memorial (pier and face 15 A),  Somme, France. He is also commemorated on the Bangor War Memorial.” (No source is given for the above information.) 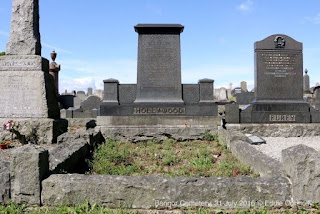 Lieutenant Arthur C. Hollywood, Royal Irish Fusiliers (County Armagh Volunteers), killed in action, was a son of Mr. James Hollywood, J.P., Red Gorton, Helen's Bay, and Albertbridge Road, Belfast. The death in action of this officer's brother, Second-Lieutenant James Hollywood, Royal Irish Rifles, attached Central Antrim Battalion, was announced in yesterday's issue. The late Lieutenant A. C. Hollywood was wounded some months ago, and had been recommended for conspicuous gallantry in recovering the body of a brother officer. Before he obtained his commission he was in business with his father.

At the fortnightly meeting of the Belfast City and District Water Commissioners, held yesterday at the Water Offices, Royal Avenue, the chairman said he wished, before they proceeded with the ordinary business of the meeting, to call their attention to the calamity that had overtaken the family of one of their members, He referred to Mr. James Hollywood, J.P., two of whose sons – boys of whom any father might be justly proud – had been killed in action in France. He was sure their hearts went out to Mr. Hollywood and his family in that terrible bereavement, and he moved – "That he deep and heartfelt sympathy of the members of the Board be respectfully tendered to Mr. and Mrs. Hollywood in the great sorrow that has fallen upon them by the death in action in France of their two sons, who, in response to their country's call, entered his Majesty's Army, and have yeilded up their lives in defence of the Empire."

Mr. E. W. Pim, J.P., in seconding the resolution, said he felt deeply for Mr. Hollywood and his wife in the great bereavement which had overtaken them, and, indeed, he could not help thinking of many families in Belfast which had also suffered great loss. Their soldiers at the front were undergoing very severe trials, and were nobly doing their duty to their King and country. (Hear, hear.)

The resolution was passed in silence, the members standing.


Portrait image from the RBAI Inst and the Great War website www.instgreatwar.com.

Posted by an extract of reflection at 12:26

an extract of reflection